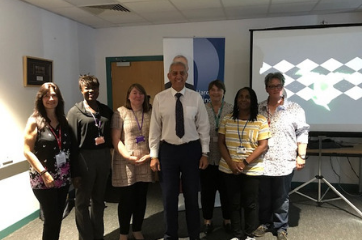 Brave young survivors of sexual abuse joined together as part of their recovery to write and produce music related to their experiences.

The Sound Sense Project was given its funding by the Police and Crime Commissioner, Hardyal Dhinsa, and led by Derby City Council. Working with SCN Media, ISVAs from SV2 joined the project providing emotional support for the young people taking part.

The project involved working with 10 teenagers from Derbyshire, who were encouraged to come together and explore their emotions and the impact of abuse through music.

Over a four month period, those involved met at various locations before recording the final songs at Superbee Community Studio in Ollerton.

An incredibly powerful album entitled ‘Sometimes Safer’ was produced consisting of six tracks which you can listen to here on Soundcloud.

The staff involved at SV2 spoke very highly of the project:

‘I could really see the positive impact the project had made on these young people’ – Sharon, Children’s ISVA

‘An observation on an inspiring journey’ – Rebecca, ISVA