How a Support Group for victims of sexual violence helped me 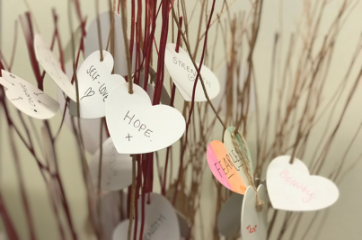 We run a Support Group twice a year in January and September. It meets at the same time and place every week, and runs for 12 weeks with two professional therapists.

A wonderful member of the group kindly shared their story of what happened and how it helped them.

So what could I possibly gain from the SV2 Peer Support Group that I didn’t already know?

My naivety and perhaps arrogance made me hesitant over accessing the support. Whilst I had a good knowledge of coping strategies and how to help myself, I decided it may be beneficial to meet others. Let me tell you, my closed mind was about to be cracked wide open.

My first realisation was that I had some fears about attending; worries that I think I may have buried. These fears included having to talk about my experiences and name what they were – not the details as such, but using words of what happened. The scariest word for me was rape. I hated it, and I still struggle with it now. But the fear most prominent was scarier: that I was making a big thing out of nothing.

I entered the room with little expectation and had given limited thought to it, and what I may want out of it. Aside from meeting other victims (now thrivers! this becomes clear later on…) I was partly going because the officer in charge of my case had been encouraging me. It was lovely to meet the other ladies and it occurred to me just how many different people have experienced sexual violence. People who appear to be so together, so confident, so…normal. I felt reassured to see these four other ladies and knew that they ‘got it’, regardless of who they were or what their background was.

The sessions that followed…

I arrived the following week and already the space was becoming a truly safe place, and I felt like I was getting to know the ladies quite quickly. A couple of the ladies became a little emotional during the group and I found myself wanting to reach out to them and to say that I too ‘get it’. By the fourth group it was me in tears. The group had started sharing parts of their stories and what struck me was their bravery, their courage, their ability to have survived.

So what was I doing there? Because I felt so safe, I shared how much of a fraud I felt. How these ladies all had it so much worse than me. How they deserve the help, but I brought my abuse onto myself. It was my fault. I was unworthy of being there. I was worthless.

The group members, and the two wonderful therapists, held that thought. They looked me in the eye and said that it was not my fault. The group had felt all of these things too and some still felt it. Did I think they shouldn’t be there? That their abuse was their own fault? No. Absolutely not.  But the group listened and validated my feelings. That was so powerful.

“It was not my fault”

In time, even after years of believing I deserved what had happened, the group helped me start to realise that this was a lie. Yes I still have moments where I question myself, but these moments are fewer than they ever have been. I actually learnt things and my naivety soon diminished. I thought I knew what abuse was, but there were details I never realised. I thought I knew what shame and guilt were and how they affect us, but I learnt the reality of how these transferred to me during the abuse. I realised that I was far from alone with how my relationships have been affected over the years (and to the extent that they had). I began to see how my boundaries have not always been healthy, and immediately began ensuring that these were healthier in my life now. I have been able to have many more open and honest conversations, due to the confidence the peer support group has given me. Whether conversations with the ladies, my husband, friends or family; all have been positively impacted by this opportunity to learn and explore more about my abuse and how it’s affected me.

One of the most wonderful parts of the 12 weeks was seeing the ladies move from victims, to survivors, to thrivers. From the pain and self blame to beginning to see how strong they are, and how there is only ever one person responsible for the abuse. We even had a catchphrase, though I will let you fill in the blank – “don’t let the b******s get you down”! We were able to start giving the blame back to the only people who owned it.

I got what I wanted from it, too. I found a place where I felt less alone, where I didn’t have to share exactly what’s happened to me, and where I could feel understood. If you are undecided about whether the peer support group is for you, give it a go. What will you lose? What could you gain?