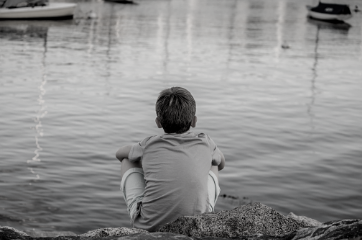 There are no words, no language, you can really use to describe the feeling of physical violation. As an adult you have some idea of what is being done to you, of what is about to happen. As a child you have no idea, no frame of reference, you have no way to understand what has been done. The language and words aren’t there. You have been hurt, you have been violated, the pain physically and mentally is overwhelming. No matter where this happens, no matter who did this to you – it is a fundamental betrayal.

I think… I know part of me died the first time it happened. Something within me was murdered, stolen away.

I understood that what was going on was wrong when I was younger. In the quiet moments between being physically attacked, being mentally played with, being sexually assaulted – I had time to think sometimes. Most of my thoughts were about how I was going to survive until the next day. How I was going to get through the night. But sometimes I would acknowledge that what was happening to me was wrong.

Everything had to be hidden when it was going on, it was dirty, my fault, if only you didn’t irritate him, no one needs to know our business. That was my life growing up. If anyone asked about the injuries, I was accident prone. If anyone asked about why I had time off school, it was because I was sickly. If anyone asked why I didn’t like to be touched, it was because I was difficult. We pretended that our home life was normal, that we were just like every other family. But after I got out, after I got away from them, I started to understand that it wasn’t normal. That nothing about it had ever been normal or healthy.

The shame of it all… the everlasting shame… I tried to hide it after it stopped. I tried to be like everyone else, normal for lack of any other word. I wanted very desperately to be like everyone else. Undamaged, unbroken. I went off the rails, took risks with my own life, drunk far too much alcohol (and if it wasn’t alcohol, there was always something else to numb me). I lashed out at the world around me.

I could pretend all I wanted, but the pain was still there.

The first time he touched me, I shattered. I didn’t understand that until later. I shattered and kept shattering each and every time he laid a hand on me in secret, or in violence, or played games with my mind. I kept shattering and breaking, falling apart. I didn’t know how to put all the pieces back together.

The truth was, I’d been destroyed.

And what do you do if you find some of them are missing?

Hunting those pieces down… Yes, you can go on a spiritual, metaphysical, therapeutic journey to find them… But eventually you have to accept that those pieces aren’t just missing, they were stolen, and you can never have them back.

It’s a horrible a moment when you realise parts of your life, parts of you, have been stolen – lost forever. Nothing you can do will ever restore them. You have to accept that when you finally find the right person to help you put yourself back together, there are going to be gaps – voids.

That emptiness can be hard. Some voids cannot be filled. Some pieces cannot be replaced. Sometimes you can find something else to fill the gap – something healthy. Something that allows you to finally live. But there will always be a few missing pieces.

It’s not an easy journey. Personally, I’ve had a lot of help – and I am finally getting the right help, from the right group. I’m a slow learner, I don’t say that in self-deprecation, it’s a fact that it has taken me a long time to learn things. Because in learning the positive things, I’ve had to unlearn the negative things. I’ve had to learn to put those negative things where they belong, and with who they belong. I’ve had to accept that what happened to me was wrong. That I am not to blame. I am not dirty or disgusting. I have nothing to be ashamed of.

Maybe that last one is a hard one, because shame is hard to live with. But… But, what was done to me was shameful. The person who did it should be ashamed. Not me.

It’s not an easy journey. It’s not always a stable one. It’s personal. But in the end… People say you are either a Victim or a Survivor. I’ve been a victim. I have survived, but I think there has to be more to it – I think that you can’t just spend the rest of your life being one or the other. I think after you survive something like this, you have to live.

And that’s my choice; to live.